The Great Falling Away

The Great Falling Away

(NOTE:  This is a continuation of the Wolves in Wool Series.  This post assumes the prerequisite reading of earlier posts)

In concluding this series on false doctrines in the church, a return to its beginning is in order; once again examining the scriptures which warn of such coming practices.  In retrospect, the teachings of the Word of Faith and the Emergent movements find themselves fully uncovered in light of numerous scriptures which have rightly predicted their rise in the latter days, their unbiblical basis of “truth” and the true motivations for their practices.

In 2 Thessalonians, the apostle Paul articulates events concerning the future rise of Antichrist and the season of the coming Great Tribulation.  Apparently, some had attempted to delude the church into believing that such events had already begun.  Paul sets the record straight that such cannot be the case until several key events have taken place. END_OF_DOCUMENT_TOKEN_TO_BE_REPLACED

The Emerging Ecumenicism: “We’re Ready to Believe You!”

The injection of transcendental meditation, code-named “contemplative prayer,”  into the church creates a dangerous precedent for the future of the body of Christ.  This is a place along the path from which there is no jumping off point.  Contemplative prayer is not a recipe which is encouraged to be joined into the monthly rotation of one’s Christian practice, but rather is to become the new staple for those who have embraced it’s folly.  And, once one adopts an element of pagan practice, full-blown paganism will follow in time.  Just as the characterization of “gateway drugs” is rightly understood to lead one down a slippery slope into a full-fledged drug involvement, so transcendental meditation- with all of its Christian-sounding names- is a pathway to demonism.  If one gets on that path, one will indeed arrive at its final destination. END_OF_DOCUMENT_TOKEN_TO_BE_REPLACED

“The Return of the King” book is released. 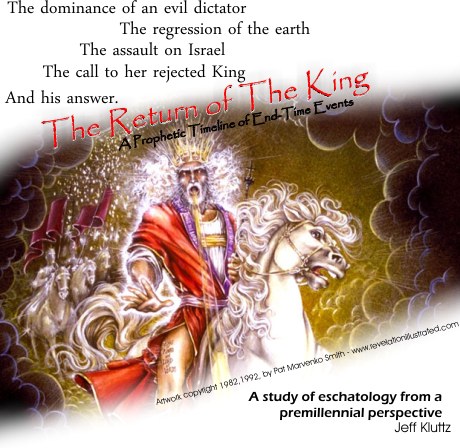 New, from ReturningKing.com, is The Return of the King: A Prophetic Timeline of End-time Events.